From the Allscripts earnings call:

From Big System CIO: “Re: HIStalk interview. My experience is that going on record encourages the vendor community to overwhelm us in claiming they can assist, regardless of whether we need help or not.” BSC politely declined my interview request for a reason I hadn’t considered – mentioning an initiative in our conversation guarantees that vendors who read it will bug them endlessly to pitch their services. I guess cold-calling it must work at least occasionally or they would stop doing it. I’m interested in both the provider and vendor side of this issue – how do you feel about reps randomly dialing someone up at the hospital hoping for a hit?

From Just Asking: “Re: IT in faith-based health systems. You’ve said you had experience there. What should I look out for if I take the IT executive job offer in front of me?” I can only relate my personal experience, which certainly varies by organization. The top problems that my IT peers had in working for an organization whose faith wasn’t ours (and that was one of the more extreme ones, I suspect) were:

From Bewilderment: “Re: succession plan. People joke about that of Judy Faulkner. What’s yours?” I don’t have one. I’ll probably just keep going until I drop dead and then the HIStalk page will be forever frozen on whatever I wrote last (hopefully something decent, unlike good Hollywood actors who died after making an awful last movie as their unplanned swan song). I won’t care at that point. If I quit by choice, I’ll say goodbye.

Last week’s reader-requested poll was a good one. Universal interoperability won’t happen until at least 5-10 years (so say 42%) or more than 10 years if ever (46%). Some comments: 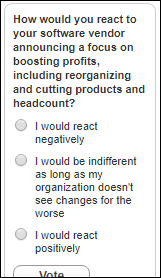 New poll to your right or here: How would you react to your software vendor announcing a focus on boosting profits, including reorganizing and cutting products and headcount? I thought of the question because of Cerner, but we’ve seen plenty of examples over the years and I’m interested in what you think. Comments are welcome, so just click the poll’s “Comments” link after voting.

Dear everyone on LinkedIn and elsewhere: please stop describing yourself as having “over XX years experience.” It’s not like a toddler’s mom or a former addict who feels the need to proudly account for fractional years, so just round up if you are that insecure. Thank you.

Live Nation is offering $20 lawn seats to some mediocre outdoor concerts (mostly 1980s has-beens and country), but I still bought tickets to three of them. It’s worth $20 to create a summer memory of sprawling on the grass while listening to the B52s supplement their Social Security checks by cautiously frugging yet again through “Rock Lobster.”

Thanks to the following companies that recently supported HIStalk. Click a logo for more information. 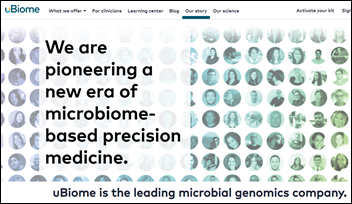 The former “citizen-scientist in residence” of UBiome – the microbiome testing vendor that was just raided by the FBI after complaints of insurance overbilling – lists Theranos-like warning signs:

FDA shuts down its “alternative summary reporting” program for breast implants and says it will eventually extend the shutdown to include all medical device problem reporting. The program allowed manufacturers to submit summary reports instead describing safety incidents individually, thus hiding them from the public eye.

Doctors are using EHRs to identify patients in measles outbreak areas who have not received the measles vaccine. It mentions NYU Langone Health, which has created alerts in Epic that notified doctors and nurses that a patient lives in a ZIP code that is experiencing a measles outbreak. Epic collected customer best practices for dealing with measles and published them into a how-to guide.

A woman who counts on getting emotional support from fellow breast cancer patients from a closed Facebook group complains that people like her are “trapped” after not realizing years ago how cavalierly Facebook manages and sells the private data of its users. She says, ‘’Our group cannot simply pick up and leave … how do we keep the same cycle from repeating on a new platform?” I will, as I often do, take the counterpoint. The group absolutely can leave Facebook and move to a platform that they control. Facebook’s most insidious tactic is hooking users on its wide-ranging services to the point that like Pavlov’s dogs, they will obediently waste hours each day in return for a reward treat that was paid for by those companies willing to buy ads and user data. Use an independent technology platform that isn’t funded by invisible, unethical data practices. Consider whatever cost is involved for the platform and its support to be the price of not having your medical information sold like at a Turkish rug bazaar.

Interoperability expert Grahame Grieve is named the winner of the 2019 John P. Glaser Health Informatics Innovator Award. My most recent interview with him (from March 2019) is here. This is a nice summary by Robert Murphy, MD of UTHealth’s School of Biomedical Informatics:

As a physician and an informatician, I am singularly impressed by Grieve’s focus on pragmatic outcomes derived from a comprehensive array of tactics that are steadily moving us toward interoperability—notably, standards development, implementation, and adoption; open source and tool development and devising interoperability toolkits; enterprise architecture and governance; and clinical document and clinical interoperability solutions. He and his colleagues are extraordinary change agents within healthcare 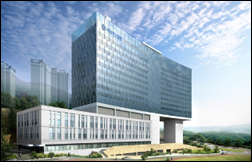 This seems largely pointless: a new hospital in South Korea will be crammed with tech gadgets that would appear to have zero impact on outcomes or cost – hologram images of isolated patients for “visits,” augmented reality-based wayfinding systems, facial recognition biometric access, and voice assistant-powered patient room amenities. A telecom vendor is co-building the hospital, so naturally it is bragging on 5G connectivity that always seems like hype more than anything. I’m picturing patients wandering around in gowns emblazoned with Nascar-like phone company ads. I am amused that one of Yonsei University Health System’s hospitals is named Gangnam Severance Hospital, which makes me picture Psy being marched off the premises with final check in hand following a musical restructuring. 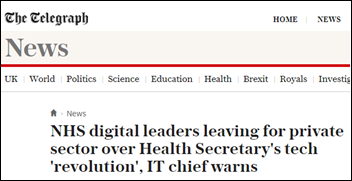 In England, former hospital CIO Richard Corbridge warns in an op-ed piece that NHS’s digital leaders are leaving for jobs in the private sector, frustrated by health secretary Matt Hancock’s unfunded push for a technology revolution such as “axe the fax.” Corbridge, who just left NHS after 23 years to join Boots as director of innovation, says hospitals can afford only 1% of their budget for IT after the cost of dealing with an aging population, historic underfunding, and staff shortages. 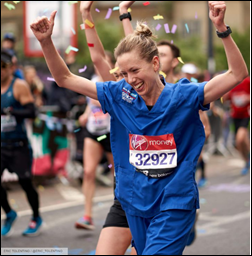 In England, Guinness World Records tells a nurse who ran the London Marathon in scrubs to raise money for Barts Charity that her time won’t qualify as a record for “running a marathon while dressed in a nurse costume” because it requires the uniform to include a dress, a pinafore apron, and a white nurse’s cap. They also advised her that wearing scrubs could confuse people into thinking she’s a doctor. She notes, “I’ve certainly never seen a male nurse wearing a dress to work.” I might take the side of GWR, however, since it isn’t looking for occupational accuracy in certifying records of runners dressed as lobsters or telephone booths (why those records even exist is another issue), with its guidelines cautioning costumed record seekers, “No one wants to run 26 miles dressed as a rabbit only to find out their ears weren’t long enough.”