Health Catalyst and Livongo become the first digital health companies to IPO since 2016. 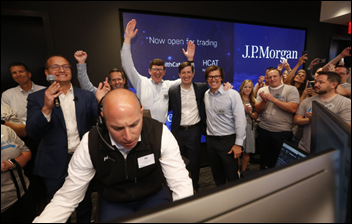 Health Catalyst (HCAT) shares, initially priced at $26, surged 45% during mid-day Nasdaq trading to end at $39 by the close of market. The company raised $180 million. 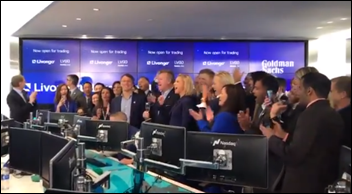 Livongo (LVGO) experienced a similar debut, with shares initially priced at $28 climbing to $40 at the start of trading and ending at $38. The company raised over $350 million.

From Socalgrunt: “Re: Jacobus Consulting closure. As follow up to the Jacobus Consulting talk a few weeks ago, I received the following from my Meditech rep: ‘Jacobus is no longer active in the consulting space for MEDITECH,’ which was used to prompt a discussion around their professional services.”

From Miami@Vice.com: “Re: Executive exodus at Nicklaus Children’s Health System in Miami. From inside … both CEO Narendra Kini, MD and CIO Ed Martinez, plus the head of HR, have been escorted out of the building.” The Miami Herald reports that CEO Narendra Kini, MD has stepped down “to pursue opportunities in innovation.” Board members say his departure has nothing to do with financial troubles that led to mass layoffs earlier this year. Tax filings show that Kini took home $1.5 million in 2017. SVP and CFO Matthew Love has been named interim CEO.

July 31 (Wednesday) 1:00 ET. “Modern Imaging Technology for the Enterprise: Mercy’s Approach That Improved Imaging Cost, Speed, Capacity, and Care Quality.” Sponsor: Mercy Technology Services. Presenter: Jim Best, executive health IT consultant, Mercy Technology Services. Enterprise imaging has become as critical as EHRs for transforming patient care, but many health systems are struggling with the limitations and costs of dated, disconnected PACS even as imaging volumes grow and radiologists report increasing levels of burnout. Radiologists at Mercy were frustrated by its nine disparate PACS, which required them to toggle between workstations, deal with slowdowns and poor reliability, and work around the inability to see the complete set of a patient’s prior images, even as demands for quick turnaround increased. In this webinar, MTS — the technical backbone of Mercy — will describe the lessons they learned in moving to a new best-of-breed PACS platform that increased radiology efficiency by 30%, with the next phase being to take advantage of new capabilities by eliminating third-party reading services and distributing workload across radiology departments to improve efficiency, capacity, and timely patient care. 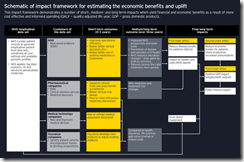 An EY consultant says the data on 55 million patients held by the UK’s NHS could be worth $12 billion if sold to commercial interests, but could also be mined by NHS itself to generate $6 billion per year through operational savings and improved patient outcomes. 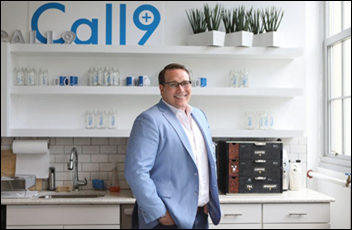 Call9 co-founder and CEO Tim Peck, MD says the shuttered nursing home telemedicine company will re-open as Call9 Medical. The company, which embedded paramedics and EMTs at customer sites in New York, closed last month after struggling to stay true to its value-based business model and issues with lead investor Redmile. The new iteration may involve a merger or acquisition, will start off with a larger network of nursing homes, and utilize primary care physicians.

The Bill & Melinda Gates Foundation invests in Halodoc, Indonesia’s largest telemedicine vendor. The financing, which wraps up the company’s $100 million Series B round, is the foundation’s first digital health investment. 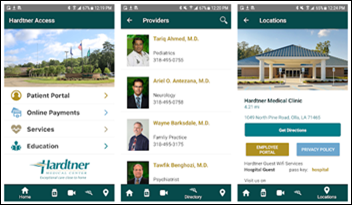 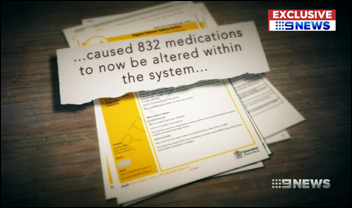 In Australia, Queensland government officials press pause on allocating $150 million needed for the continued roll out of Cerner Millenium software across Queensland Health facilities. Initially budgeted at $600 million, the software has gone live at 14 out of 20 hospitals. It has ballooned past its budget, and suffered from leadership scandals and numerous end-user reports of patient safety errors. 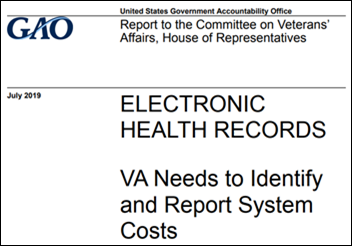 A Government Accountability Office report on VistA maintenance costs during the VA’s 10-year transition to Cerner shows that the agency can’t provide a reliable estimate because it hasn’t been able to define what the 30 year-old, homegrown system is. The findings have, in turn, left lawmakers on the House Veterans Affairs Subcommittee on Technology Modernization doubtful of overall project costs, which have already risen to $10 billion. Subcommittee Chair Rep. Susie Lee (D-NV) pointed out that, “Money does not grow on trees. At what point do we lay out exactly what the costs are? There are many unknowns in this transition. The fact that this plan is still being formulated is concerning.” 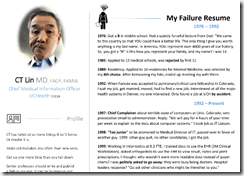 University of Colorado Health CMIO CT Lin, MD publishes “My Failure Resume” to encourage younger colleagues and highlight that success is not as clear-cut as typical resumes would have us believe. A few excerpts: