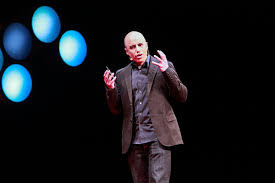 This post is a transcript of that attention grabbing interview with Dr. Zubin Damania – aka @ZDoggMD on Twitter. Just so you know, that’s two “G’s” in ZDoggMD since everyone knows one “G” is necessary but not sufficient to be a gangster!

Mabel: We’re back! You’re watching continuing coverage of the World Healthcare Congress here in Washington DC. Thanks so much for joining us and a special welcome to those of you who are joining us virtually. Now we’re going to have some fun here. We have a very special guest in our studio: Dr. Zubin Damania who has the title of Rapping Doctor. I’m really curious, so strap in. So, Zubin, you’re a doctor?

ZDoggMD: Yeah and I’ve never been given the title of Rapping Doctor except by you so this is first and I’m gonna take it.

ZDoggMD: I’m gonna roll with it. You know, the basic story is, I’m a physician. I’m an internist. A hospitalist. I worked at Stanford for ten years in a pseudo academic practice; hated everything about our system and the way that the system works:

It crushes creativity innovation. It is a Greek, hierarchical kiss the ring, suck up to authority for your entire career and then one day you’ll be the ring that’s kissed.

And that is the mentality of medicine. So, we get the system that comes out of that; which is a big steaming piece of crap.
So, as a result I got very burned out. I had a midlife crisis early at 35 and started as a cry for help putting out videos on YouTube under a pseudonym ZDoggMD with two G’s because one is necessary but not sufficient to be a gangster; just so you know.
And (pointing at Mabel) it’s funny to see how uncomfortable she is! I love it! I love it! Fight the power!
Mabel: I’m on my own show, I’m really chill.

ZDoggMD: So… in the setting of that, I started putting these videos out on YouTube and everything from Manhood in The Mirror, which was a parity of Michael Jackson’s Man in The Mirror where I grabbed my testicles repeatedly [and] encouraged testicular self-examine in boys.

And what I started finding is people from [unintelligible] were playing this video on repeat in the waiting room. Kids were getting it stuck in their head and we’re going home and doing the self-exam. And one of them caught an early testicular cancer.

by reaching out to patients where they are, by being human, by not playing all the usual stodgy games that medical people play, we were able to actually make a difference

and so, as the video started to grow, I was given an opportunity with Tony Hsieh – the Zappos online shoe store. He said:

“Quit your job at Stanford. Move your wife and your two kids to the heart of downtown Las Vegas where I’ll give you a little startup money. And you have to try to see what you can do in your own way to make healthcare better because you’re really good at complaining about it in your videos but you haven’t done anything. You’re still working the job that you think is broken where it’s a hamster wheel and patients were coming in and out.”
So, after agonizing over that – because I had a nice job – okay? And the shirt with the alligator on it and all of that. We decided to go for it and we built a clinic called Turntable Health which is a new model primary care clinic that is a one fee, sort of, All You Can Treat Buffet of Care with a team. So, health coaches, nurses, licensed clinical social workers, doctors – all working together in service of the patient. But also in service of each other because that’s the piece that’s missing.

Not that: “We don’t support each other. We’re incredibly hierarchical. When something goes wrong we all point the finger.”

So, we said: “What if we changed all of that and we support each other with compassion so that we could support the patients?”
And the idea is to keep them out of trouble. See them when they’re well. As well as when they’re sick. Get rid of the transaction component of health care so they don’t pay co-pays. It’s one flat fee that either they pay $80 a month or their insurer pays. And our biggest clients were insurers like Nevada Health Co-op, Culinary Workers Union.
They said: “Look. We believe in a model of prevention. We’re going to fund it and in return you’re going to show us actual outcomes.”

Mabel: Okay, yeah. How would this be scalable to other places that have those broken systems? What does it take? The component?

ZDoggMD: What we figured out is that you have to do it in a local way because all healthcare is local. So, if you try to do a direct primary care concierge light model in a downtown Las Vegas setting it’s going to fail. It has to be integrated with say Medicaid. You have to do a pilot program with CMS. You can work with Medicare Advantage. But the principles are what we call health 3.0.

So, it’s basically this idea that you take the relationship of the old days of health care, which is Health 1.0 out, but it was very paternalistic, equalize it. Make it apart with your patient because the patients are empowered too. And you hold them accountable.
You say: “You know what? You have to release this victimhood of illness and let me be the shepherd; but you’re in charge.” Right? So that’s one step. The second step is Health 2.0 where we’re living now: ‘Click, click, click, click, click boxes in an EHR; wearables that nobody wears; quality measures that don’t measure quality; carrots and sticks that incentivize the wrong behavior; all those things you have to transcend.
You say yes, the technology is important but it has to enable the human relationship and what emerges is this [Health] 3.0 vision.

And it’s very simple. It’s just a vision that you can fulfill locally by saying:

“Ok. We’re going to work in teams. We’re going to focus on prevention. And we’re going to get paid based on actual outcomes that matter to our patients; which means it needs to be physician and clinician lead but empowered by administrators and business people and government officials working together for the common cause: which is improve outcomes on a population and an individual level.”

ZDoggMD: So, you can be evidence empowered. You can have all this evidence-based medicine but you can’t be evidence enslaved. I can’t go: “Well Mabel, I have to do a mammogram because the government says that if I don’t click the mammogram box I won’t get my 99213 code.”

I have to go: “Let’s talk about your concerns around breast cancer. What’s your family history? Are you worried about a false positive where we might have to do a biopsy? If that worries you then see us more often and we’ll stay connected. Rather than just reflexively ordering a test.”

Mabel: Are you still in Las Vegas now?

ZDoggMD: Yeah, we’re still in Las Vegas. We closed our downtown clinic but our partners IORA Health took [unintelligible – sounds like “took the commander fillet”] Yes, a fantastic human being, he took that model and now he’s expanding in multiple states. So, what happened in Vegas doesn’t stay in Vegas.

So, what I’ve shifted to doing is a Facebook Live show that we do every single day. It’s called Incident Report and it reaches anywhere from fifty to a hundred thousand viewers in episode. And we talk about how to build health 3.0. Taking the news of the day and parsing it through the engine of how do we make health care better.

Mabel: How are your viewers being impacted by what’s going on in Washington?

ZDoggMD: You know, I would say that there’s a lot of discussion about what is Trump going to do? What are the Democrats going to do? The Affordable Care Act. And we’ve had show’s about exactly this. The punchline is: It really doesn’t matter because health care is a trans partisan issue.

If we all say: “You know, what we want – it’s like what Jimmy Kimmel Live said yesterday in such an emotional way about his childhood [unintelligible – sounds like ‘had attention all gleeful oh yeah]“

And he said: “You know what, it was about everybody coming together in a team to take care of my son. And if I were uninsured, he might have died in the old days.”

And with pre-existing, it’s really about the tribe that we built on Facebook that says: No, it’s bigger than politics. It’s about human beings. And if we can figure out a way to [unintelligible] local versions to build that and they’re suffering. Like these health care providers around the country are suffering, they feel commoditized. They feel like they’re working in every line unappreciated. So, we’re trying to give them focus.

Mabel: Okay. Yeah. Are you going to do any rapping?

ZDoggMD: Today? Yeah. Oh, it wouldn’t be a wouldn’t be a ZDogg show if we didn’t. We’re gonna do a piece on end of life. An outpatient medicine piece. A piece on the calling that is healthcare.

Mabel: Can you give me a little sample? Just a preview?

ZDoggMD: Sure. So Ain’t The Way to Die was an Eminem Rihanna song [unintelligible] about how we don’t have a conversation about end of life. 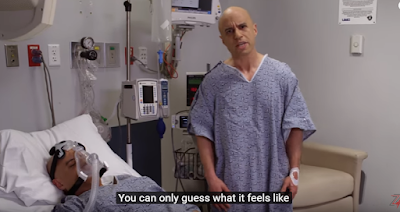 And it’s told in two stages: one is the stage of the patient’s perspective stuck in a bed on a ventilator unable to speak. So, it’s just a spirit figure that’s rapping and then the second phase is told from the point of view of the physician who feels like he’s violating his oath to do no harm by torturing this patient because they never had the discussion before the patient was unable to talk. So, the patient comes out he’s like:

I can’t tell you what I really want. You can only guess what it feels like. And right now, it’s a steel knife in my windpipe. I can’t breathe but you still fight because you can’t fight long as the wrongs done right protocols tight. How the drugs. Try to sedate you like a pin cushion. I hate it. The more I suffer I suffocate. Right before I’m about to die you resuscitate me. You think you saved me and I hate it. Wait!

So, it’s something like that. There’s a chorus and all that. Yeah. It’ll be fun.

Mabel: You’re going to be a hard act to follow Zubin.

ZDoggMD: I don’t know. I mean you guys are actually, you know, dropping mad science. I’m a professional clown as my dad says.

Mabel: All right. Well look forward to more when we see you up on stage. Thank you so much.

Mabel: And thank you for watching. That’s why you need to stay tuned. I’m Mabel Jong

And That’s That!
Dr. Zubin Damania, uh, I mean ZDoggMD, will be sharing his unique insight into healthcare at next weeks 2017 AHIP Institute in Austin, TX. If you’re attending, be sure to check him out on June 8th at 5:00pm.  And perhaps consider following him on Twitter where he shares as @ZDoggMD.  And perhaps me too where I share as @ShimCode.